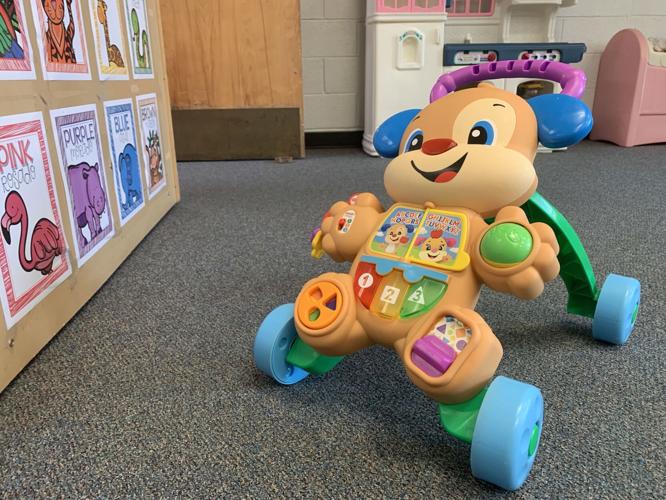 A toy to help children explore sensory learning and aid in walking sits in a Center for Early Childhood Education (CECE) classroom on Aug. 17. The center is scheduled to close Aug. 2023. 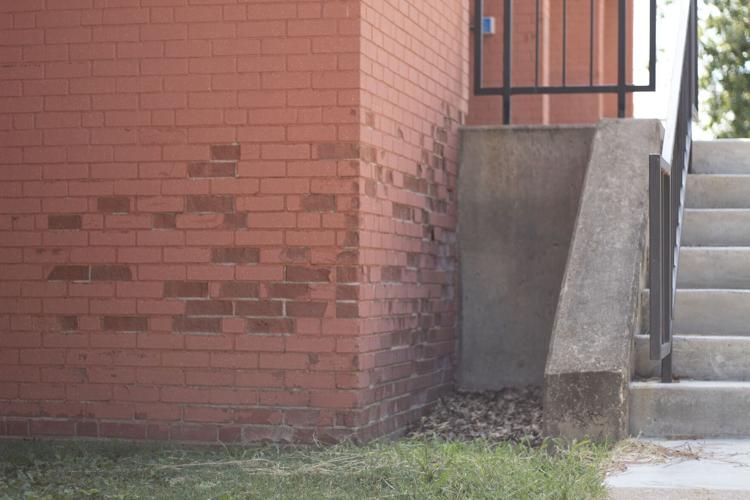 Bricks on the north east corner of Butcher Education Center show wear as plans for the demolition of the building continue to be made.

A toy to help children explore sensory learning and aid in walking sits in a Center for Early Childhood Education (CECE) classroom on Aug. 17. The center is scheduled to close Aug. 2023.

Bricks on the north east corner of Butcher Education Center show wear as plans for the demolition of the building continue to be made.

After Emporia State president Ken Hush defended the plan to demolish Butcher Education Center and close on-campus childcare, the response from the community has been evident.

Last Saturday, The Bulletin published an article regarding Hush’s comment “I laugh” at the concerns of Center for Early Childhood Education (CECE) activists. In the interview where he made the seemingly dismissive comments, he tried to take back “laugh” so it wouldn’t run and a spokesperson for the university later said he didn’t mean what he said.

These comments sparked concern and disdain from some community members as the signatures on the petition to save the CECE continue to grow.

Despite the increasing backlash from the community, a spokesperson for the university said they don’t see the decision changing.

“This is what happens when you try to run a service entity like a business,” said Bobbi Mlynar, former Emporia mayor, on Facebook. “Can you imagine the uproar if the City of Emporia closed the zoo, sold the golf course or parks for a housing development, shuttered the public library, or eliminated the Aquatic Center, all to save money? (None of those pay for themselves.) Publicly financed entities can’t be run like businesses. They must be run better and differently than businesses.”

Gwen Larson, director of media relations at ESU, said Mlynar’s comment was a “good perspective,” but seems to disagree, saying the students are the university’s customers.

“I think that the skills that go into analyzing business models can be applied to higher education,” Larson said.

Mlynar went on to say that “a major crisis in Emporia is childcare” and wonders if the university is working with the city to help.

“I just really felt that deciding to close the childcare center didn't help Emporia at all,” Mlynar said. “And I really feel that Emporia and Lyon County have done their best to help Emporia State University. And I think that there's probably a creative way that perhaps it could be kept open.”

One of the factors Larson cited as being a reason for the closure of CECE was the fact that, when the decision to cease operation was announced in May, 40 children were enrolled. Only 10 of those children were connected to faculty, staff or students of ESU.

“So we understand, and many of us have already been in this situation raising our own families, we understand how important good reliable childcare is for families,” Larson said. “But the numbers told us that it is not a benefit that was being used by the population that it was created for and so in looking at resources and where to put resources, they would not be into CECE.”

The city of Emporia has given ESU financial aid and support multiple times in the forms of scholarship funds, the university athletic track, “very expensive” drainage repairs, according to Mlynar.

“I disagree. I certainly will say that,” Mlynar said. “Because I think as much cooperation as Emporia State receives from the community, and from the county and the city, I really believe that as a sign of appreciation, it would be really good if they could keep that open. Besides, doesn't Emporia State have early childhood development?”

ESU has moved their education programs to a “professional development school model” where students go into the community to gain experience in a “working school” instead of the CECE, according to Larson.

The petition to save the CECE has 416 signatures as of Friday afternoon, 10 more than it did before Hush’s comments.

Even with the increasing number of signatures, the conclusions drawn by the university regarding what the “modern student” wants still stands.

This model of the “modern student” comes from various companies, including Ruffalo Noel Levitz (RNL). RNL is a company out of Cedar Rapids, Iowa that partners with universities and nonprofits to “to enroll the students they want, help more students graduate and succeed, and build lifelong relationships with donors,” according to their official website.

Even though these companies are not local or specific to Emporia, Larson said students at ESU will not be asked what they think should happen to CECE.

“I would say no,” Larson said. “Because I don't see the decision changing.”

While this decision may be final, community members are still voicing their concerns about the closing of CECE.

“I found the comments from this University President disgusting. Out of touch with real families trying to find childcare. Obvious he lives in 1950,” said Lisa Grigsby-Young on Twitter.

Activists have not yet met with ESU administration, but Cory Falldine, vice president of infrastructure, is actively communicating with them to set up a meeting he and Hush attend, according to Larson.

“I'm just very glad that the dialogue has been opened and we've had a response,” said Erika Martin, an associate professor of biological science and co-author of the petition. “And I really hope that it will be very apparent that this is not a group of angry people. It's very thoughtful people that just want to open a conversation and are frankly willing to put in some actual work time to help solve the problem, not just complain about it and have someone else solve it because that's not fair. And that's not what we're asking.”

Activists understand that it is not easy to provide a solution to the problem, according to Martin. They are not expecting the administration to “snap (their) fingers” and find a quick fix, but they are happy to be setting up a meeting to talk through the reality of the situation and what can be done.

3 Tips for Aging in Place at Your Winter Destination