Skip to main content
You are the owner of this article.
Edit Article Add New Article
You have permission to edit this article.
Edit
Home
News
Opinion
Hornet Life
Entertainment
From the Wire
Sports
Empowered Magazine
Full Issues 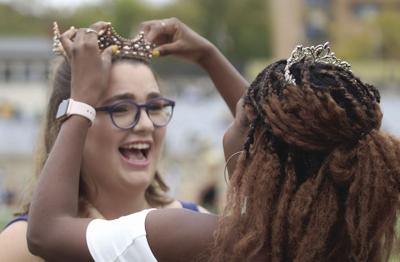 After a week of Homecoming festivities at Emporia State University, a school-wide nomination and voting process came to an end, narrowing down the 10 candidates to the final two.

“I was excited and nervous at the same time,” Ortman said. “Right when it happened, I honestly didn’t believe it, I was just super happy and honored to be out there in the first place.”

The candidacy process starts with RSO’s on campus nominating 10% of their senior members. They had to have 90+ hours and a 3.0 GPA or higher to be nominated. A ballot was sent out to students Wednesday, Oct. 20 and ended Friday, Oct. 22 before the game on Saturday.

This year, the nomination requirements were completely by score, which is different than in the past, according to Lendi Bland, elementary education, early childhood and special education instructor.

“It’s the first year that it hasn’t been five males and five females.” Bland said

Homecoming is a time where past, current, and future hornets are able to gather and join in on festivities together making it a community event.

“Every year, I always get excited about Homecoming and seeing past students I’ve had and people I went to college with,” Bland said.

The RSO in charge of homecoming, SPURS, stands for service, patriotism, understanding, respect, and sacrifice. The national organization itself is no longer active, as it was disbanded in 2006, according to Bland.

Campus decided to keep it a community organization as a result.

How to improve your credit score in the New Year [Infographic]

How many couples make long-term financial decisions together? Just 20%