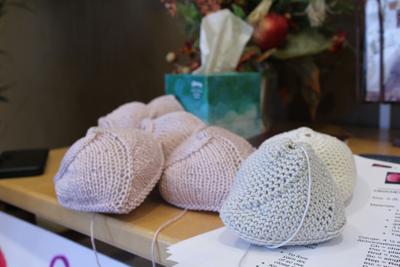 Members of the Unwind Fiber Arts Club at Emporia State have been making “knitted knockers” to donate to the Central Care Cancer Center throughout the month of October.

“When you’re dealing with something that’s really drastically changing your body and you’re having to deal with discomfort and upsetting emotions and all these really tumultuous life-changing things,” Tollman said. “You shouldn’t have to deal with silicone on your chest and in your bra.”

Knitted Knockers are “special handmade breast prosthesis for women who have undergone mastectomies or other procedures to the breast,” according to knittedknockers.org.

They range in cup size and are made of hypoallergenic materials such as 100 percent cotton and a polyester filling. Knockers can be worn in bras and are washable once the filling has been removed by opening the built-in drawstring on the back, according to president of Unwind and senior history major Alyssa Tollman.

The most appealing part of using the knitted knockers over traditional breast prosthetics is that they are softer, more comfortable and feel like real breasts, according to knittedknockers.org.

The idea to make and donate knitted knockers came from Ellen Hansen, Unwind’s faculty adviser and professor emerita of geography. Tollman wanted to keep the donations local, so she contacted the Central Care Cancer Center, on 1401 W. 12th Ave in Emporia.

The Cancer Center does not have a knitted knockers program, so Tollman felt the need was there.

“While this is not a difficult pattern to do by any stretch of the imagination,” Tollman said, “it’s not something I would try and teach to a beginner until they have a firm grasp of how knitting works, or crocheting.”

Tollman, along with Hansen and two other officers, are expecting to make around 30 individual knockers by the end of the month when they plan to donate them. As of the primary interview on Oct. 21, Tollman had made seven knockers and was working on her eighth as she explained the Project.

The center did not request a specific number of knockers, but said there would be a larger need for bigger cup sizes since breast cancer more highly impacts people with larger breasts, according to Tollman.

Tollman hopes Unwind can make one knitted and one crocheted pair in each cup size. The club has been keeping track of what sizes have been made on a shared spreadsheet, according to Tollman.

Some of the reasons for making the knitted knockers are more personal than just fulfilling community service requirements. Tollman lost her cousin to brain cancer six years ago and so she has seen the struggles of cancer.

“I think a lot of things in medicine are all about options and it’s more freeing, I believe, to have the option of one thing or the other rather than just having to deal with things as they come,” Tollman said.

Olivia Kinkaid, treasurer of Unwind and senior history major, has also experienced the hardships of having a family member go through cancer. Her great-grandmother has survived breast cancer twice, and her mother was diagnosed in 2014.

Kinkaid explained that her mother had been self-conscious when her chemotherapy treatments caused hair loss, but has since embraced that she is surviving and her hair will grow back.

Unwind’s next service project will be making warm knitted or crocheted items such as hats, gloves and scarves for ESU’s project warmth throughout the month of November.

Keep Healthy and Stress Less Through the Holidays and Beyond [Video]

Celebrating the Past, Looking Toward the Future This Diabetes Awareness Month