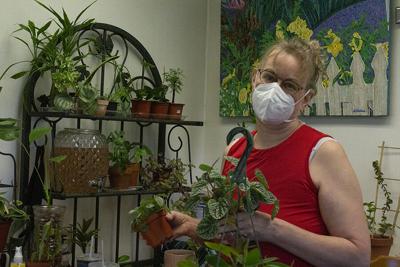 Earthly Delights is a name seemingly right out of a storybook.

In fact, the name comes directly from an Elizabeth Hand short story, where a second-hand store carries the name.

Emporia also has an Earthly Delights of its own, named after the story by Hand, a plant nursery run by Shannon Takla at 105 E. 12th Ave.

Takla opened Earthly Delights on June 5th after leaving her job of two years, at the Hostess factory in town, only three days prior.

She quit her job after contracting COVID-19 on two separate occasions and asking to work days instead of nights for the factory, which they did not grant her.

She found herself exhausted all the time and was no longer able to work the job like she used to, so after renting the building she’s currently working out of, she quit her job on a Wednesday, announced Thursday on social media she was going to open on Saturday and did just that.

Takla originally had the idea to open a combination book and plant store, but due to funding and other concerns, she landed on the idea of solely taking care of and selling plants.

“It’s always been a love of mine,” Takla said. “My grandparents were both farmers, and my parents were both teachers, so those things combined into love of plants and love of nature, and also love of learning, and so sort of the overarching nursery idea really was very appealing.”

While the shop is a small building, Takla made it her goal to fill the space however she could and continue to develop her store every day.

David McKenzie, associate professor of biological sciences at Emporia State, has been to Earthly Delights multiple times since it opened and said Takla is “super nice” and “super knowledgeable.”

McKenzie also said that this shop has a wide variety of plants for every skill level and for someone new to plants it’s “the ideal place to go” because Takla can tell them what type of plants will work for them and how to manage them.

Earthly Delights caters to people with all kinds of plant interests and needs, even those who have never taken care of a plant are welcome in the store.

Being across from the campus also means that students on campus can walk across the street and look at her selection.

Takla has a section of her shop that has affordable plants and pots for students and even has free succulent starters for people to take. She also has a free plant cutting system where people can take a cutting and bring one they have in when they can.

“I love seeing the college students because they are so happy to be here and they’re such joy for life,” Takla said. “I really think that as an older person there really is something to be said for that sort of youthful exuberance and it’s been very fun to get to talk to them and sell plants to them.”

Kailey Seiler, junior secondary education major, bought a peperomia plant for her roommate’s birthday and described the nursery as “very welcoming” and Takla as “so considerate.”

“She went above and beyond by putting the plant in a gift bag since it was a gift,” said Seiler.

People tend to keep plants in their homes for many reasons and Earthly Delights has a  wide variety of plants for all those needs including normal house plants and rare finds.

“Plants can make you happy and everyone should have at least one and her store would be a great place to get it,” said McKenzie “She caters toward the indoor plant market, so it’s perfect.”