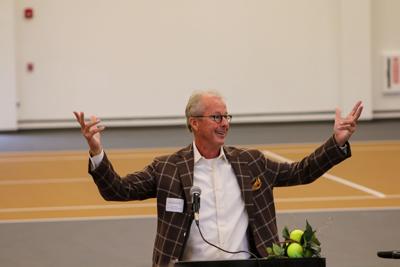 An Emporia State alumnus was named interim president by the Kansas Board of Regents yesterday afternoon. Ken Hush will replace the current acting president, George Arasimowicz, while KBOR launches their search for ESU’s 18th president.

“We looked for someone who has passion for the university,” said Cheryl Harrison-Lee, KBOR Chair. “It's always fantastic when you have an alumn of the university, someone who's also shown a commitment to the university and someone who also has strong leadership skills, who's visionary and has a proven track record of being an executive, and we found all those things in Mr. Hush.”

Hush graduated from ESU in 1982, with a dual degree in business administration and marketing. While at ESU, Hush led the tennis team to four Central States Intercollegiate Conference titles, one NAIA District 10 Title and three NAIA National Tournament appearances, according to ESU Athletics.

“(Finding out) was goosebumps, it was excitement,” Hush said. “I just want to do well on behalf of all the alumni and current students, which are first and foremost, and the community.”

After being named interim president, Hush turned around to start immediately, with today being his first official day.

“I am honored and humbled to be the interim president of the university from which I graduated in the community in which I grew up,” said Hush in the press release from KBOR. “I am excited for the opportunity to work with students, faculty and staff to make ESU better, stronger and a place where excellence is a constant goal.”

Previously, Hush served as chairman of the ESU Foundation Board of Trustees and on the Wichita State University Board of Trustees, according to the press release from KBOR. Most recently, he worked as CEO for an Emporia-based company, BLI Rentals.

Harrison-Lee said she’s excited to see what Hush will do during his time as interim president.

“Ken Hush possesses a passion for Emporia State and brings extensive leadership experience to the role of interim president,” said Harrison-Lee in yesterday’s press release from KBOR. “I am thankful that he is willing to take on the responsibility and steward the university during this transitional period.”

KBOR plans on conducting a closed search for the next president in the hopes of drawing in more candidates.

“When we do a closed search, we tend to attract a larger pool of candidates,” Harrison-Lee said. “A lot of current employees don't want to show their hand that they are seeking a new opportunity. (Doing a closed search) creates a comfort level for either sitting presidents or sitting provosts—that they can apply and that it will be held confidential in case they don't get the position.”

As KBOR prepares to launch the search committee for the next president, they’re looking at a six-month timeline with hopes to fill the position permanently by Fall 2022. They’ll start by naming a committee chair in December, and then assembling the full committee.

“In January, we're bringing the committee together,” said Blake Flanders, KBOR president. “(We’ll) develop the leadership profile for the position—That's a little bit like a job description. Then we'll do some listening sessions for the entire campus and the entire community. So even if you're not on the committee, we want you to participate there as we develop this job description or profile so that you can have input into that.”

A Festive Menu Fit for Family and Friends