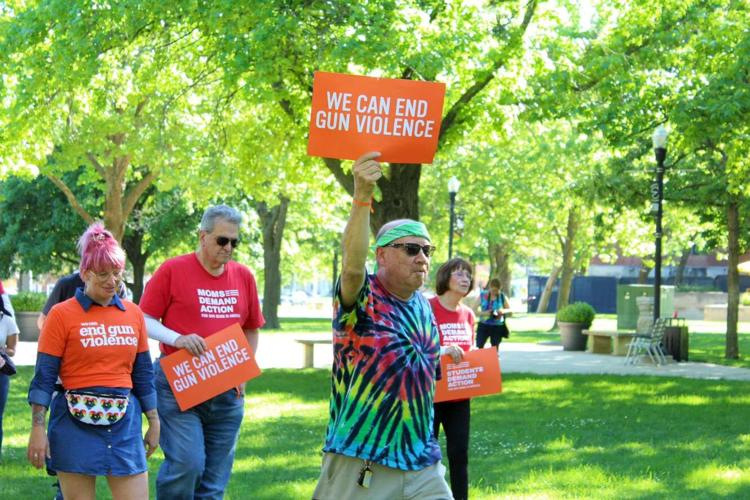 Students and community members gather Friday evening in Kellogg Circle to protest gun violence in the wake of the Uvalde school shooting which left 21 dead. 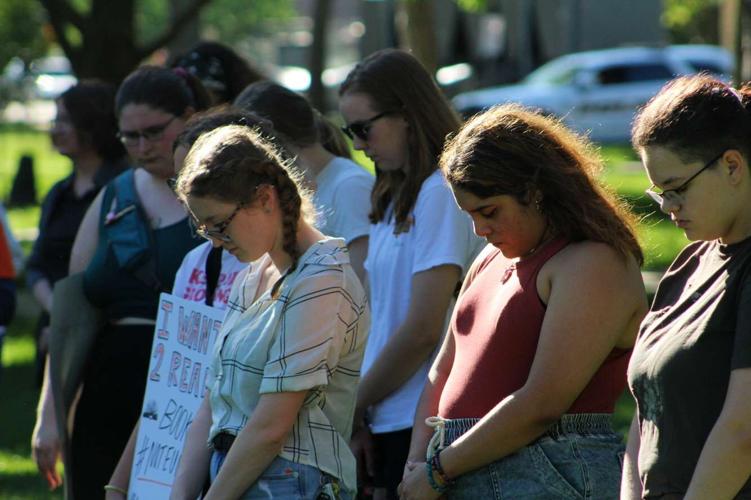 Students and community members gather Friday evening in Kellogg Circle to protest gun violence in the wake of the Uvalde school shooting which left 21 dead.

In the aftermath of the mass shooting at Robb Elementary School in Uvalde, Texas where 19 children and two teachers were killed after a gunman opened fire in their classroom, Emporia State students, staff and members of the Emporia community held a protest.

The ‘Protect Kids Not Guns’ protest was held on Friday in Kellogg Circle. Students, faculty and the Emporia community gathered to do a “pacific” walk and a vigil.

The protest was organized by two ESU students: Jack Anderson, senior social sciences and Spanish education major and Khushi Ghanchi, a Spring 2022 graduate. They collaborated with Moms Demand Action to hold this protest.

“It is to spread the word so that politicians finally take action on this matter,” Anderson said. “Rather than let it lie dormant and let more school shootings happen and more hate crimes happen.”

In 2022 alone, there have been 221 mass shootings in the U.S and 27 of those happened in schools, according to the Gun Violence Archive. The shooting at Robb Elementary is the second-deadliest school shooting in the U.S., following the Sandy Hook Elementary School shooting in 2012 that killed 20 children and six adults.

“I mean, it's been 10 years since Sandy Hook happened, and we haven't seen any progress,” Ghanchi said. “It all gets reduced to people that they are taking away their Second Amendment,one of the reasons why the Second Amendment was written by our founding fathers was so that everyone can have the right to protect themselves. Now, my question is, why do you need military grade assault weapons to protect yourself?”

Anderson and Ghanchi believe the problem lies with the lack of gun regulation. They held the protest in hopes of making a change and encouraging politicians to take action to stop mass shootings.

For Anderson, the issue is a personal one. He lost his friend Michael Williamson to gun violence.

“He was like a younger brother to me,” Anderson said.

Michael lived in Lenexa, Kansas and had a Tinder date with a girl. In the early morning of Feb. 27, the couple went back to Michael parents' house, a man followed them, planted bombs and then broke into the house. He had been tracking the girl for a while already, according to Anderson.

“This guy walked in the back door with two rifles, you know, heavy weaponry, a pistol in his holster and a bulletproof vest on,” Anderson said. “And he walked up into Mikey's room and shot them both and then shot himself.”

Michael died four hours later in the hospital. He was only 20 years old. Anderson believes this could have been prevented.

“Background checks might have stopped this person from getting a gun,” Anderson said during the protest while sharing his story. “It would have made them realize his mental incapabilities and potentially stopped him from being such a heinous being.”

The protest began with a march around Kellogg Circle, where participants chanted different verses to express their frustration with how the response and prevention for mass shooting at schools are handled. Participants were asking for universal background checks for gun purchases and called out the gun lobby and National Rifle Association.

“We are the people,” Anderson would shout out and people would repeat. “We are the children of America. Enough is enough.”

The people who attended had different motives for showing up but all wanted an end to gun violence and mass shootings.

“I think we have to understand that not everyone should own a gun,” said George Milton, a retired ESU faculty member and whose wife is part of Moms Demand Action. “Especially young students being 18, 16, 15, 14 when they get AR-15 that are designated to kill. It does not make sense to own a gun like that.”

“I hope for a change, that our politicians will hear us and start making better gun laws to protect our kids,” said Stephanie Hawley, a mother who is part of the Emporia community. “It is ridiculous that these (mass shootings) are happening at our schools and to our community.”

Uvalde’s population is 80% Latino or Hispanic and the majority of the students killed in the shooting were, as well

“I am tired of mass shootings, it is very devasting,” Baza said. “As a Hispanic myself, the shooting in Uvalde hit home. And also, as a future educator I signed up to be a teacher to teach not to have to protect my students from a mass shooter.”

Some solutions were offered by speakers to end gun violence, one of them was to vote in the elections for those candidates who would actually make a change.

McGuire, who was invited by Anderson, shared an encounter with a community member while doing his walking tours. This individual, who McGuire declined to name due to privacy, supported the Second Amendment and told McGuire to not take his guns if he gets elected. McGuire said they discussed gun safety and he asked the man to help him write legislation.

When asked by The Bulletin what his agenda and plans would be in office to promote gun safety, he said all he has is what the community member gave him.

“I cannot say that I have anything else except this,” McGuire said. “I am willing to listen to every other thought that somebody else has to say about it, of how we end gun violence. This legislation, I cannot say that it is in final form. But if I am elected, I know that I will take it with me to Topeka to at least see if we can continue to do something. And I mean, I am all for it.”

The vigil concluded with Rebecca Rodriguez Carey, an assistant professor of sociology and criminology and mother of three, stepping up to the mic.

“Guns are the number one cause of death for kids in America,” Rodriguez Carey said. “This is not the first time I have thought about in the physical layout where I teach in and how one day we might be forced to run, hide and fight. This is the weight of being and educator today, this is the weight a parent must carry.”