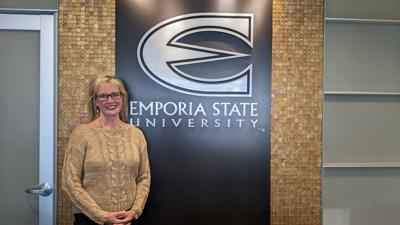 Shelly Gehrke has taken on the newly created position of Vice President of Enrollment Management and Student Success. Her first day in the new position was Jan. 10.

Undergraduate enrollment rates in the United States have dropped 3.2% this last fall and 3.4% the previous school year, according to the National Public Radio. Because of this, the Kansas Board of Regents (KBOR) has set a goal to raise enrollment rates and retention of students.

Gehrke’s new position was created to align ESU with this goal and to remove a layer between the president, the enrollment and student success departments, according to Gwen Larson, director of media relations.

Gehrke has worked for Emporia State since 2010 and was formerly the associate vice president of Student Affairs. She was kept in mind for this position when it was established according to Interim President Ken Hush, who created the position.

“She’s dynamic, she gets along well from a persona and perspective with the city and our alumnus and she’s very favorable throughout campus,” Hush said.“With someone like that, that’s a priority of both ESU and the (Kansas Board of) Regents.”

With this new position, the gap between the Office of Admissions, Student Advising Center (SAC), Student Accessibility and Support Services (SASS) and the Academic Center for Excellence and Success (ACES) will be bridged in order to bring about better care for the student body, according to Lydia Barnhart, director of admissions.

“Dr. Gehrke is, gosh, she’s just an amazing woman,” Barnhart said. “She cares so much about the students and the student’s success here at the university that she is willing to do the work needed, the paperwork needed and have the tough conversations needed to improve the overall student experience.”

Gehrke is a “strong believer in the power of an institution”.

She told a story of a woman she once spoke with while helping with her enrollment. The woman she was helping enroll had two kids, one in middle school and one in high school, and was working towards finishing her undergraduate degree now that her children were older. The student Gehrke was helping mentioned how much she’d learned in her psychology class and how she wished she’d taken it before having children because she believed she could’ve used that information to raise her children better.

“That just speaks to the power of going to college, of higher education and how you learn so much and that it’s not just preparing you for your career,” Gehrke said. “It’s preparing you to raise your children and contribute to your society, community and to take care of yourselves.”