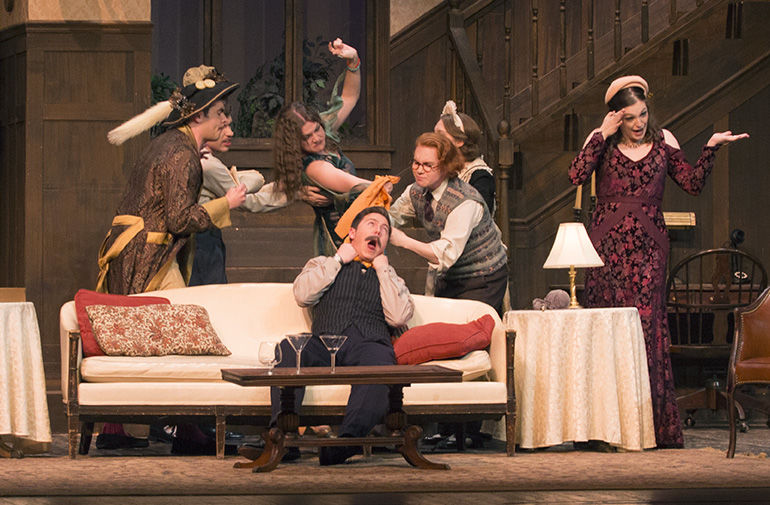 ESU theatre students rehearse a dramatic scene during their dress rehearsal on Feb. 25 in Karl C. Bruder Theatre. “Death by Design” is the opening production of the spring season and it will run until Feb. 29. 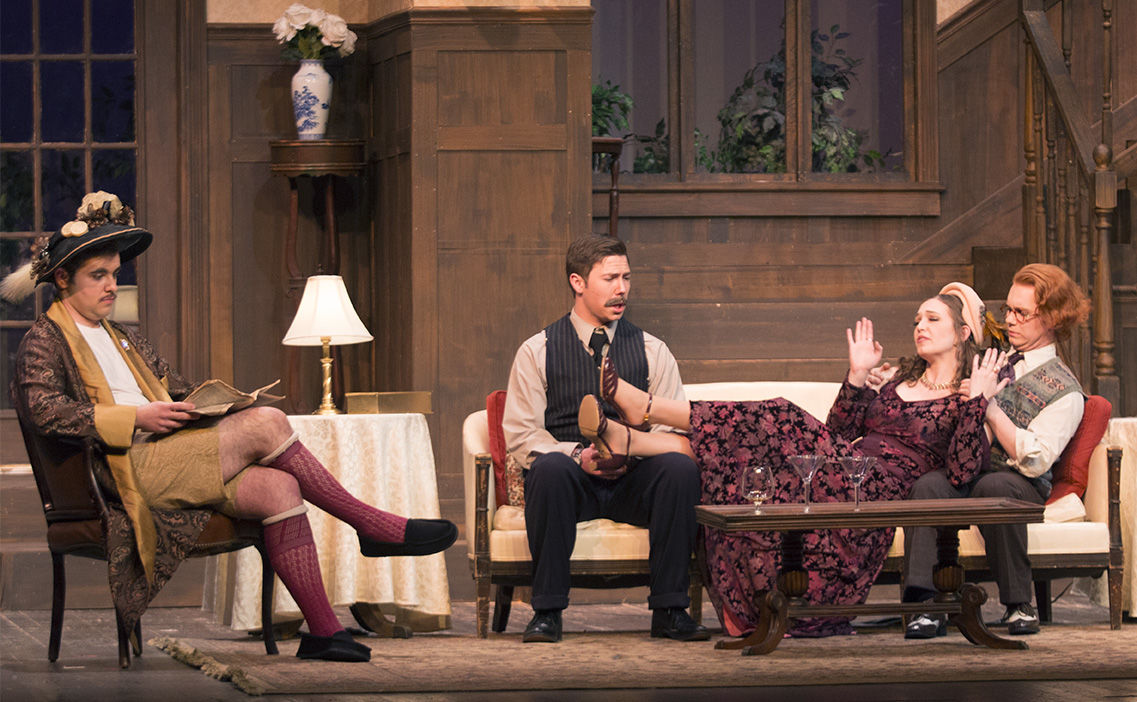 ESU theatre students perform “Death by Design” during dress rehearsal on Feb. 25 in Karl C. Bruder Theatre. Tickets are priced at $15/$12/$7 (ESU students) at the door.

ESU theatre students rehearse a dramatic scene during their dress rehearsal on Feb. 25 in Karl C. Bruder Theatre. “Death by Design” is the opening production of the spring season and it will run until Feb. 29.

ESU theatre students perform “Death by Design” during dress rehearsal on Feb. 25 in Karl C. Bruder Theatre. Tickets are priced at $15/$12/$7 (ESU students) at the door.

Jim Harris will make his directorial debut at Emporia State with “Death by Design,” which Harris describes as a “who-done-it,” comedy. The play will take place at 7:30 p.m. on Feb. 26-29 in the Karl C. Bruder theater.

“It was a monster task to direct (at my last school),” said Harris, assistant professor of communication and theatre. “To come here and be part of a (Bachelor of Fine Arts) program and be a part of the collaborative process is just an incredible experience. Everybody here is just fantastic at what they do.”

Harris said he’s excited to be working at Emporia State.

“The cast has meshed really well together,” said Lucas Coble, junior theater major. “I love the director, Jim Harris,” Coble said. “This is his first year at Emporia State and this is his directorial debut and I think he’s doing a fantastic job at it. Just the cast in general, we really have a nice cohesion together and we really listen and we’re really there for each other when we need each other during the play.”

Coble said the plot is hard to describe, but the play separates itself from others.

“What this production (does is) really set itself apart from other plays,” Coble said. “It’s definitely the comedy within the play. It’s a farce. So, it’s kind of hard for me to explain the plot because the plot is very loose in some areas, but what really drives it home is the wit.”

Humor is a big part of the plot, Harris said.

“You get all of the fun suspense of the who done it yet still limited with lots of beautifully written and constructed jokes throughout,” Harris said. “It’s a fun time.”

After almost a month of rehearsals, the comedy has gotten a bit dry, Wells said. “I’m just excited for us to finally have an audience because we’ve been practicing this for a month and like our director says, ‘Dying is easy, but doing comedy is even harder,’” Wells said. “We’ve been practicing this thing for almost a month to where we were getting really tired of the jokes, so we’re just really excited for an audience to come in and see our hard work and hopefully get a lot of laughs.”

“I think (the audience is) really going to enjoy the jokes that are in the play,” Wells said. “It’s very, very witty and very clever because the play was inspired by Agatha Christie’s and Noel Coward’s books... She just had a very, very witty, timing and his writing is just very clever.”

Tickets are $5 for students, $12 for adults and faculty. Attendees are encouraged to buy tickets in advance.

Say 'salut' with your next home meal

Five Tips to Help You Get Better Sleep Now

Soak up some sunshine to fight cabin fever