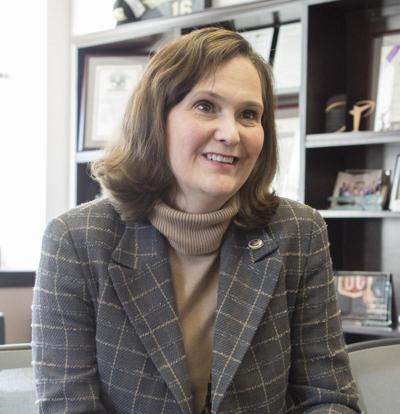 Emporia State president Allison Garrett is leaving the university and taking a new position as the chancellor and chief executive officer for the Oklahoma State System of Higher Education. Her last day at ESU will be on Oct. 15.

“I’m just really honored, very humbled that I have this opportunity,” Garrett said during a virtual press conference with Emporia news media from a parked car in Oklahoma.

The role will be leading the entire higher education system of 25 universities and colleges in Oklahoma, according to Garrett.

She will deal with matters relating to standards, courses, programs of study, budget allocations and fees and tuition, according to the press release announcing her resignation.

wellness benefit, according to the Oklahoman.

Garrett cited the broader impact that she will have as one of the reasons she took the position.

“ESU is poised for wonderful things,” Garrett said. “But when I learned about this opportunity several months ago, I began to wonder ‘Would that be an opportunity that makes sense and allows me to maybe have a positive impact on the lives of more young people?’ The more I talked to people down here (in Oklahoma), the clearer that became for me.”

Garrett is also the first woman to hold this position in the Oklahoma State System of Higher Education.

Garrett has been ESU’s president since 2016. During her tenure, ESU has had the lowest student debt of all public Regents institutions in Kansas for five years in a row and was the only Kansas university ranked in the Top 100 for social mobility by the U.S. News and World Report, according to the press release.

“What I am the most proud of is that over the last few years, we’ve broken our retention records several times and that translates into record numbers of ESU students graduating,” Garrett said. “To me, the power of higher ed to transform lives really is all about students actually achieving that milestone and I am just so proud of what so many of our students have been able to do in the last few years and really grateful to the incredible faculty and staff at Emporia State who support those students on the way.”

Garrett also cited record fundraising, record numbers of graduates, progress in Diversity, Equity and Inclusion, an updated strategic plan and multiple facilities projects as accomplishments during her time at ESU.

However, this was a team effort and members of ESU worked together to achieve these things, according to Garrett.

“There’s a lot that’s happened in a relatively short period of time,” Garrett said. “But to me, it’s the impact on individual students’ lives that is the most important.”

The most notable aspect of her time at ESU is serving as president during the pandemic.

Many changes, including going completely online in the Spring of 2020 to keeping the mask mandate for this current semester, have been made in reaction to COVID-19.

“(This experience taught me) how deeply people care about our students succeeding,” Garrett said. “I think the fact that our faculty and staff were able to be nimble and able to provide for a largely face-to-face experience for our students throughout the pandemic is a great example of that.”

Garrett is excited about the direction that ESU is heading in and there are several things that she will be leaving behind for Oklahoma.

However, she listed examples of connecting with students as opportunities she will miss, such as trying high-jumping with the track team.

“Some of it’s silly little things because I really enjoy hanging out with students and interacting with them,” Garrett said.

In the next couple of years, Garrett expects ESU’s enrollment to grow coming out of the pandemic because of the phenomenal quality of it’s programs and low tuition rate.

She is also confident that there will be lots of interest in the position of university president because of ESU’s achievements.

“Hiring the very best people possible, I think, is always a great strategy, and then trying as much as possible to stay out of their way is really important,” Garrett said.

It will be “absolutely crucial” for the new president to get to know the faculty, staff and students at ESU and donors, according to Garrett.

“I am really going to miss the people at Emporia State,” Garrett said. “I have colleagues that I have grown to appreciate deeply that have become good friends, students who I’m rooting for to finish college or to have amazing lives and I’m still going to be in their corner in every way possible, just not physically there.”

The Kansas Board of Regents will appoint an interim president and hire the new president at a later date.

Provost George Arasimowicz will be the acting president beginning on Oct. 16.

There is still time to protect against flu

The Ho-Ho History of the Christmas Card