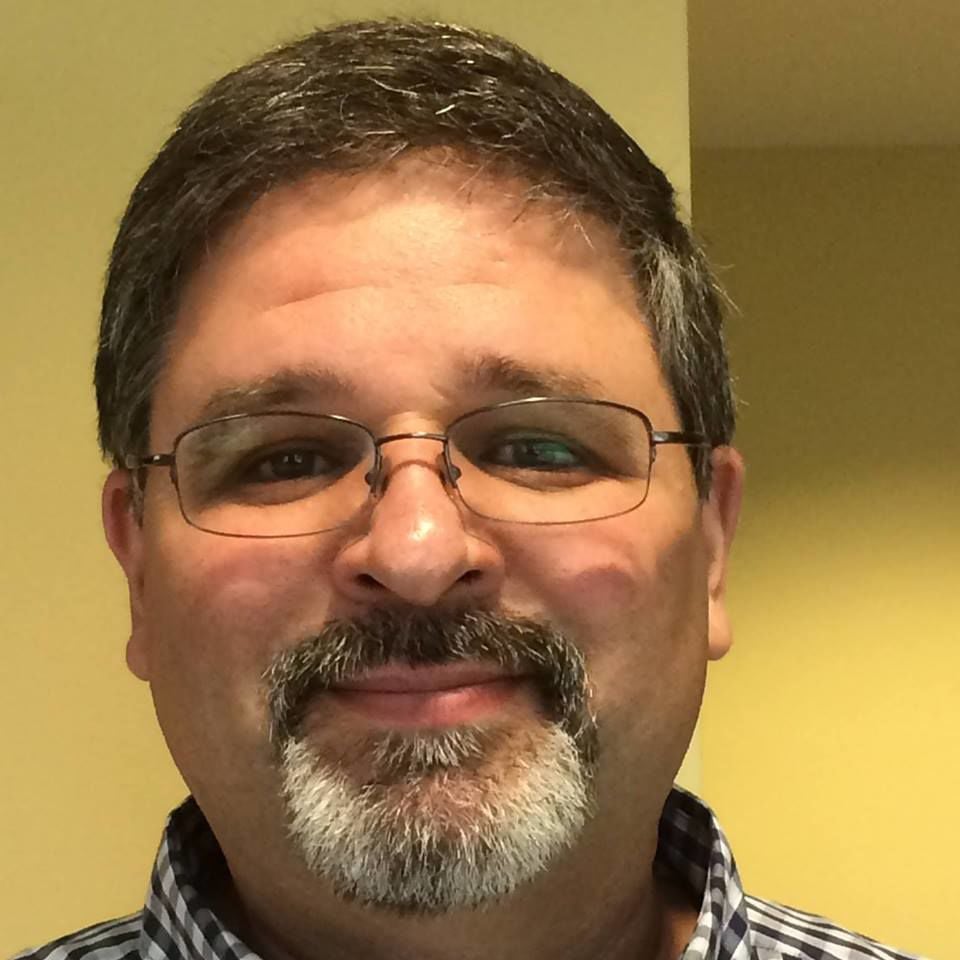 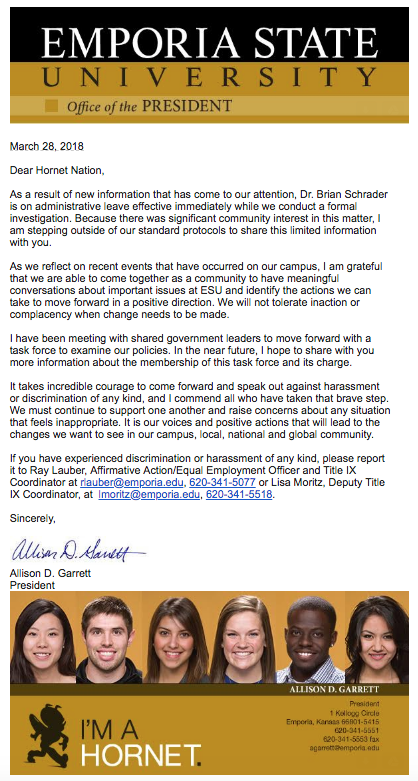 The tenured psychology professor at the center of a sexual harassment case that shook Emporia State earlier this semester was placed on administrative leave Wednesday afternoon, and a new investigation was announced.

The professor, Brian Schrader, was placed on leave “effectively immediately,” according to an email statement issued campus-wide by ESU President Allison Garrett at 5:01 p.m. Garrett said a new, formal investigation would be conducted into the incident “as a result of new information that has come to our attention.”

It was unclear from the email what the new information was, and university officials said they couldn’t discuss it.

The university held separate town hall and informational meetings in late February and early March about sexual harassment on campus after the The Bulletin published stories about “Jane,” a Korean undergraduate, who described her frustration with the university after filing a sexual battery complaint against Schrader. Jane said Schrader had taken her to a storage room near his office in Visser Hall, touched her inappropriately and tried to kiss her.

Although university police and human resources found, based on a “preponderance of evidence,” that Schrader was likely responsible, he faced little or no discipline. During the informational meeting in March, Garrett said that a panel of tenured faculty found there was insufficient evidence to fire Schrader. At the meeting, Provost David Cordle indicated he had recommended firing.

The controversy also prompted a “Justice for Jane” protest March 5 on campus.

The Bulletin withheld the Korean student’s real name and referred to her as “Jane” within this story to protect her against the stigma of reporting sexual misconduct. The Bulletin chose to name Schrader because of the “preponderance of evidence” that indicated he violated the university’s sexual conduct policy, according to the final summary of the investigation.

“Because there was significant community interest in this matter, I am stepping outside of our standard protocols to share this limited information with you,” Garrett said in Wednesday email.

Schrader is still on staff, but will no longer be on campus, which means he will continue to be paid, according to Gwen Larson, assistant director of marketing and media relations. The Office of Human Resources referred all questions to Larson.

Schrader’s employment contract is up May 18 of this year and he is being paid $71,937 for this academic year, which started August 14, according to employment contracts The Bulletin previously received through Open Records requests.

All of Schrader’s classes will be reassigned to other psychology professors, according Larson said.

“I don’t want to see him, so it’s good news for me,” Jane said Wednesday, after learning of Garrett’s statement. “I saw him on the third floor (of Visser) two weeks ago, but even though the event was well past, I was very upset.”

It was unclear at this time when and if Schrader will return to campus and what qualifications need to be met in order for him to return.

“The administration has never contacted me,” Jane said. “It’s nice that he’s leaving school after this, but I still hate him.”

“As we reflect on recent events that have occurred on our campus, I am grateful that we are able to come together as a community to have meaningful conversations about important issues at ESU and identify the actions we can take to move forward in a positive direction,” Garrett said in her statement. “We will not tolerate inaction or complacency when change needs to be made.”

Schrader did not respond Wednesday night to repeated requests for comment.

Correction: In a previous version of this article, it was said that Schrader's psychology classes would be taken over by tenured psychology professors. The professors who are taking over are not tenured, but tenure-track.

How to take a dream cruise on an authentic sailing ship