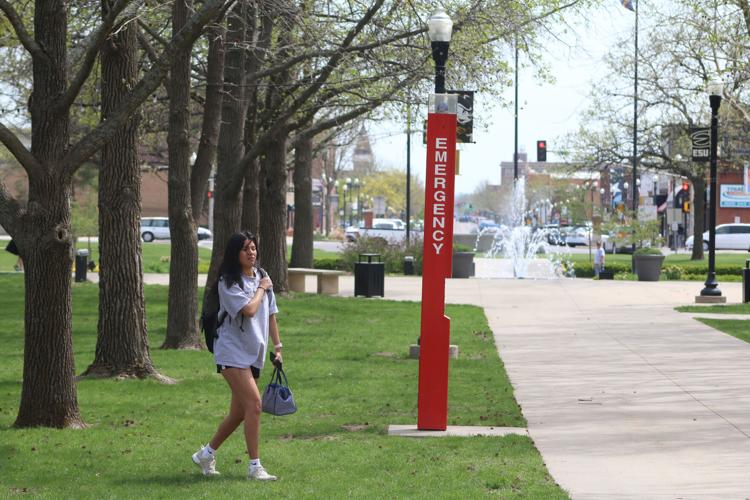 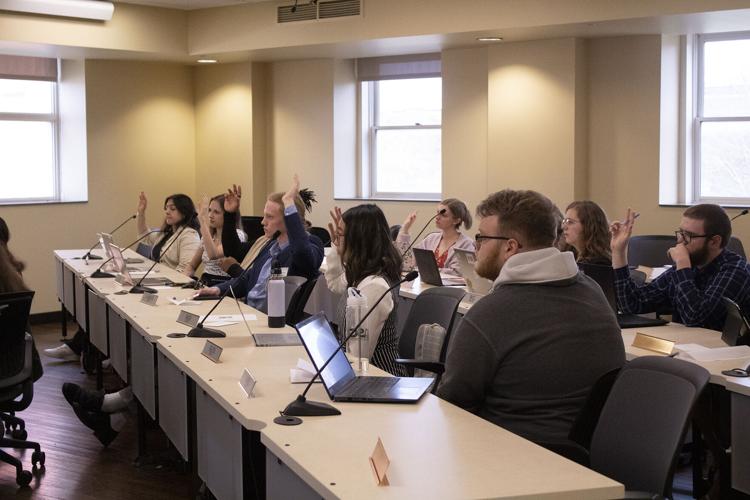 Associated Student Government senators vote to pass a resolution regarding the annual safety walk that took place on April 13. Concerns reported from the walk included gaps between the emergency lights, poor lighting in certain areas and unsafe crosswalks and streets. Some of these concerns had been reported after the 2019 safety walk, as well.

Associated Student Government senators vote to pass a resolution regarding the annual safety walk that took place on April 13. Concerns reported from the walk included gaps between the emergency lights, poor lighting in certain areas and unsafe crosswalks and streets. Some of these concerns had been reported after the 2019 safety walk, as well.

Associated Student Government’s (ASG) annual safety walk has raised concerns on Emporia State’s campus, some of which were brought up during the last safety walk in 2019. ASG passed a resolution addressing these concerns, which include poor lighting and insufficient emergency phones, with a textual amendment to “make the wording a little stronger.”

The amendment was proposed by senator Jack Anderson, senior social science and Spanish education major. The line stating that ASG appreciates the efforts of those who participated and who are “working with ASG to work towards addressing them” has been changed to “working with ASG to address them.”

“We talked about it in the committee meeting that these problems hadn’t been addressed and that we can word it a certain way that would make the university to be held more accountable for these things,” Anderson said. “And I felt that the wording in the original amendment wasn’t sufficient to do that.”

The resolution acts as an official statement that the issues brought up during the safety walk are important and should be addressed if possible, according to campus and community relations chair and senior music education major, Andrew Villaca. However, a resolution does not enact any policy.

Poor lighting in several areas and “gaps” between the emergency phones around campus were among the major concerns. Villaca called the area between Plumb Hall, King Hall, Beach Hall and Roosevelt Hall a “deadzone.”

This concern was on the list of issues from the 2019 walk, which asked for the “addition of an emergency booth” by Beach Hall.

Khushi Ghanchi, ASG chief of staff and senior biochemistry and molecular biology major, was the campus and community relations chair in 2019 and suggested that ASG pass another resolution this year. However, she attributed the lack of action to COVID-19 and changes in leadership.

“But I’m confident with the new leadership,” Ghanchi said. “And senator Villaca’s done a great job reaching out to everyone and I think it should be good now.”

Villaca said he wished they had tested the emergency phones this year because they aren’t used often, but he hadn’t thought to do so.

Some of the areas in the report with poor lighting were the southwest corner of the William Allen White Library, the east side of Abigail Morse Hall, around Wooster Lake and by the gravel parking on the north end of campus. The “deadzone” from Plumb Hall to Schallenkamp Hall was also listed.

Street safety and the addition of crosswalks on certain areas of campus were also brought up this year. A request for “more frequent markers” and “speed limit signs” on Highland Street was made in the report. However, Villaca is unsure if this falls under something ESU could change.

This area was also brought up in the 2019 report because “lots of parking on street” makes it “hard to see past cars.”

Another street on campus, 15th Avenue between Cremer Hall and Butcher Education Center, was called a “yikes area” in this year’s report. The area was described as a “confusing place where people see many ‘almost vehicle/pedestrian’ accidents.”

Reasons given for this confusion were the stop sign by the “trash collection area” isn’t clear and is in a “blind spot,” there are no clear lanes and the “pedestrian mall” feeds into that area. However, the report stated the group was “not sure what can be done.”

Other concerns were sidewalk damage around campus and cameras in the Gray parking area and by the Art Annex.

Villaca sent the report to ASG president Lucy Steyer, ASG vice-president Lauren Moon and ESU vice president for infrastructure Cory Falldine. He instructed them to “share it with anybody else they thought it felt pertinent to or that they could do anything about it.”

Falldine was very receptive to student feedback during the safety walk, according to Villaca.

“I hope that whatever improvements we make end up not being noticed, for lack of a better term,” Villaca said. “Because if an area of campus is truly safe, then it should just be seamless and people shouldn’t be like ‘Oh yeah, this is really lovely lighting here,’ they should be like ‘I don’t feel unsafe.’”