Skip to main content
You are the owner of this article.
Edit Article Add New Article
You have permission to edit this article.
Edit
Home
News
Opinion
Hornet Life
Entertainment
Sports
Campus Commons
From the Wire
En Español
Empowered Magazine
Full Issues
1 of 3 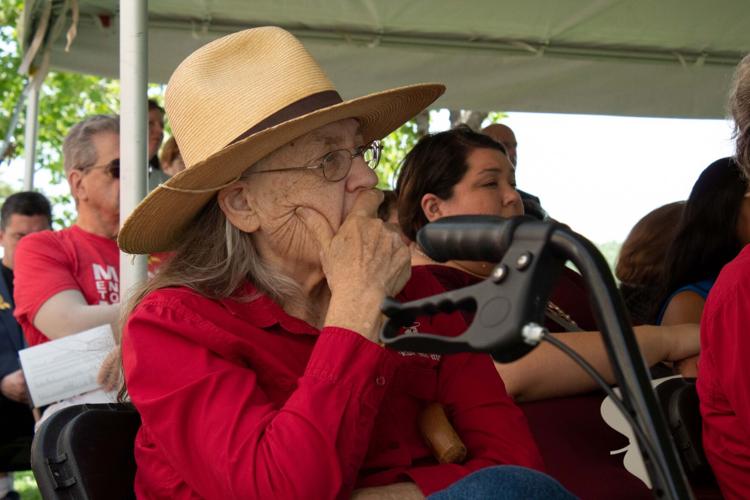 Joyce Thierer, former professor at Emporia State, listens to speakers honor educators lost in the field on Friday. This was Thierer's first time at a rededication ceremony for the National Memorial to Fallen Educators and she wanted to honor those devoted to protecting their students. 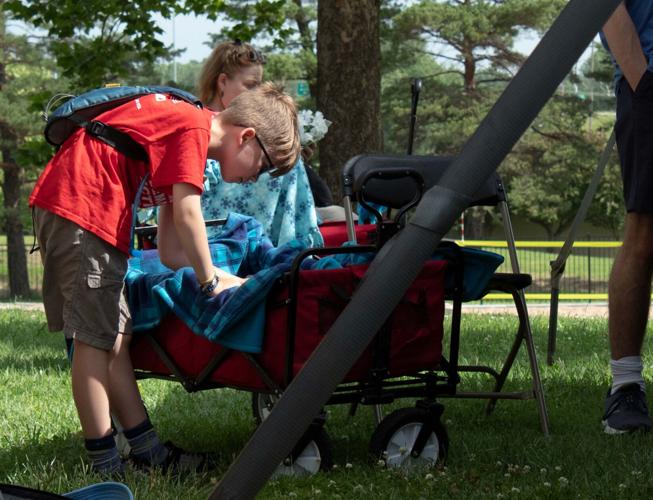 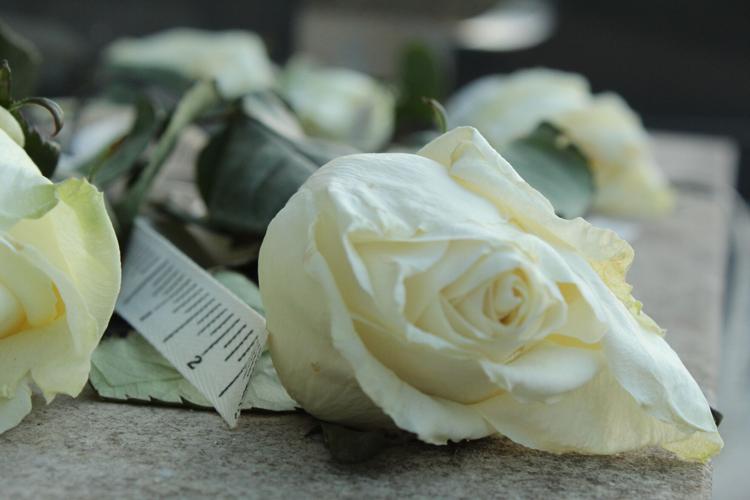 Darryl Johnston and Pat Graff, National Teachers Hall of Fame inductees placed roses at the bottom of the National Memorial to Fallen Educators to honor the 16 new names added on Friday.

Joyce Thierer, former professor at Emporia State, listens to speakers honor educators lost in the field on Friday. This was Thierer's first time at a rededication ceremony for the National Memorial to Fallen Educators and she wanted to honor those devoted to protecting their students.

Darryl Johnston and Pat Graff, National Teachers Hall of Fame inductees placed roses at the bottom of the National Memorial to Fallen Educators to honor the 16 new names added on Friday.

While Anthony Salvatore recounted the horrific reality of what happens when children are killed in school shootings, 8-year-old Brady Wiebel and his 4-year-old sister Grace Wiebel played with emotional support bunnies in the back of the crowd.

“Some people get upset with me when I say that they were killed instead of saying they were lost,” said Salvatore, former administrator at Sandy Hook, in his speech at the National Memorial to Fallen Educators on Friday.

Salvatore told listeners that the kids were nearly “disintegrated” and that “there’s nothing left” when a child is hit with a bullet and stories are beginning to come out about needing dna tests to identify the body.

Emporia State hosted the National Teachers Hall of Fame Rededication Ceremony for the National Memorial to Fallen Educators Friday to honor educators who lost their lives in the line of duty. This was the first time the ceremony was held since 2019 due to the COVID-19 pandemic.

Sixteen new names were added to the memorial including Eva Mireles and Irma Garcia, who died May 24 in Uvalde, Texas. The event hosted speakers including Salvatore, State Representative Mark Schreiber and Senator Roger Marshall.

During his speech, Salvatore pleaded with listeners to not blame school shootings on mental health struggles, saying it was ultimately the choices the individual made.

“There are a lot of people with mental illness that don’t kill people,” Salvatore said. “That’s a way to easily label a problem that is incorrect.”

While the memorial honors those lost in education as a whole, the shadow of Uvalde weighed heavily on the ceremony.

The National Teachers Hall of Fame holds a 501(c)(3) nonprofit status, prohibiting any form of political stance to be taken, according to Carol Strickland, its executive director. The organization abides by these rules since it “couldn’t exist” without maintaining a nonprofit status, Strickland said.

While the organization can’t make any statements on politics, speakers are still allowed to talk about issues like gun violence in schools during their speeches.

“It’s a gathering to celebrate these lives, but I think symbolically there is a message to America,” Strickland said. “We need to stop doing these things that put names on the wall and I hope that message gets through.”

Along with the speakers, the attending audience filled the 75 available seats and left some people standing along the edges of the space.

Among the crowd were representatives of Moms Demand Action for Gun Sense in America. They attended to support the teachers honored and show that they are trying to “enact safe gun laws,” according to volunteer Stephanie Hawley.

“Just understand that our main mission is reducing gun violence in all its forms,” said Leslie Milton, volunteer for the group. “And the fact that we have to worry about that at our schools where our youngest citizens are attending is our focus for being here.”

Peacebunny Island was also present at the ceremony, led by CEO and Founder Caleb Smith. Smith, 17, started the organization in Minnesota when he was eight after seeing the therapy dogs at Sandy Hook. He now works to train emotional support and therapy rabbits to go to places of trauma to “share happiness with people.”

Smith brought multiple rabbits with him to the ceremony and allowed for people to pet the animals and find solace in them. Some of the rabbits present will go to Uvalde in August to provide comfort to the students, according to Smith. The rabbits will be named after streets in the town.

As a student himself, Smith said tragedies like the shooting at Robb Elementary school affect him directly.

“It’s definitely changed my perspective and seeing that, like when we went to Sandy Hook, I believe I was a year older than the students impacted,” Smith said. “And just seeing that these are people that are my age and just remembering that life is a gift, and to spend it and share it with people, and find something that you’re interested in and find that spark of what inspires you to do things.”

Part of Peacebunny Island’s goal is to educate people about rabbits and even teach children skills like the math involved in feeding the animals along the way.

“I think I may get a bunny when I grow up,” said 8-year-old Brady after the ceremony where he spent time holding and petting the rabbits.

While Brady may have spent some time with the bunnies, the meaning of the event wasn’t lost on him. He asked his mom, Ann Williamson, why they were there, saying it was “sad.”

“I want to show you that there is sad stuff in the world,” Williamson said. “And good stuff, like the bunnies.”