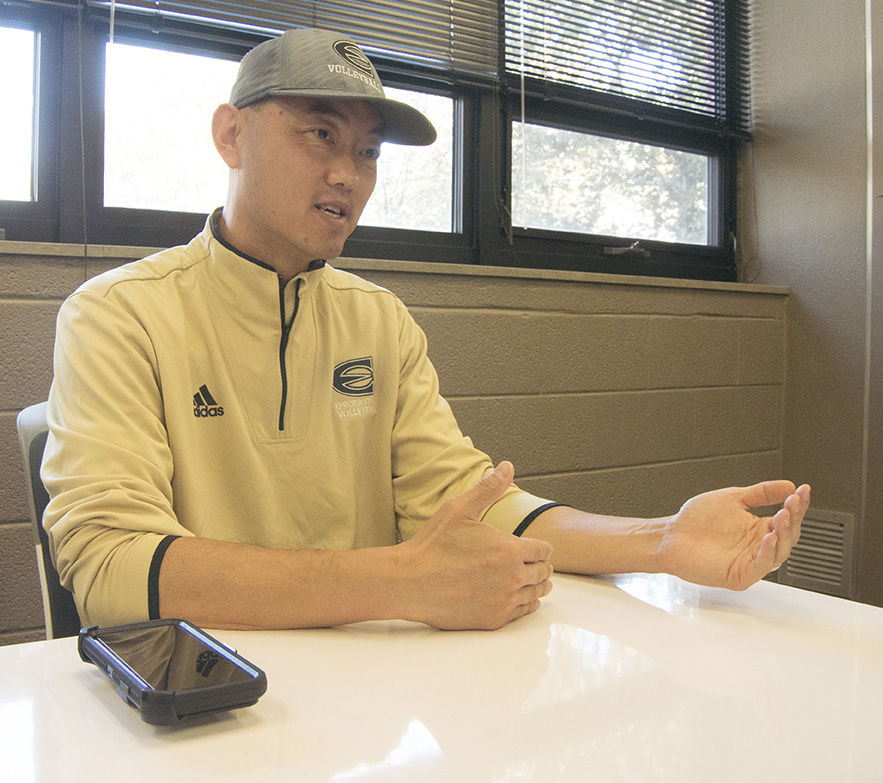 Bing Xu, head volleyball coach, speaks about The Epoch Times and what it means to him on Nov. 3. Xu has been distributing the Chinese language newspaper for three years and currently drops off copies to William Allen White Library. 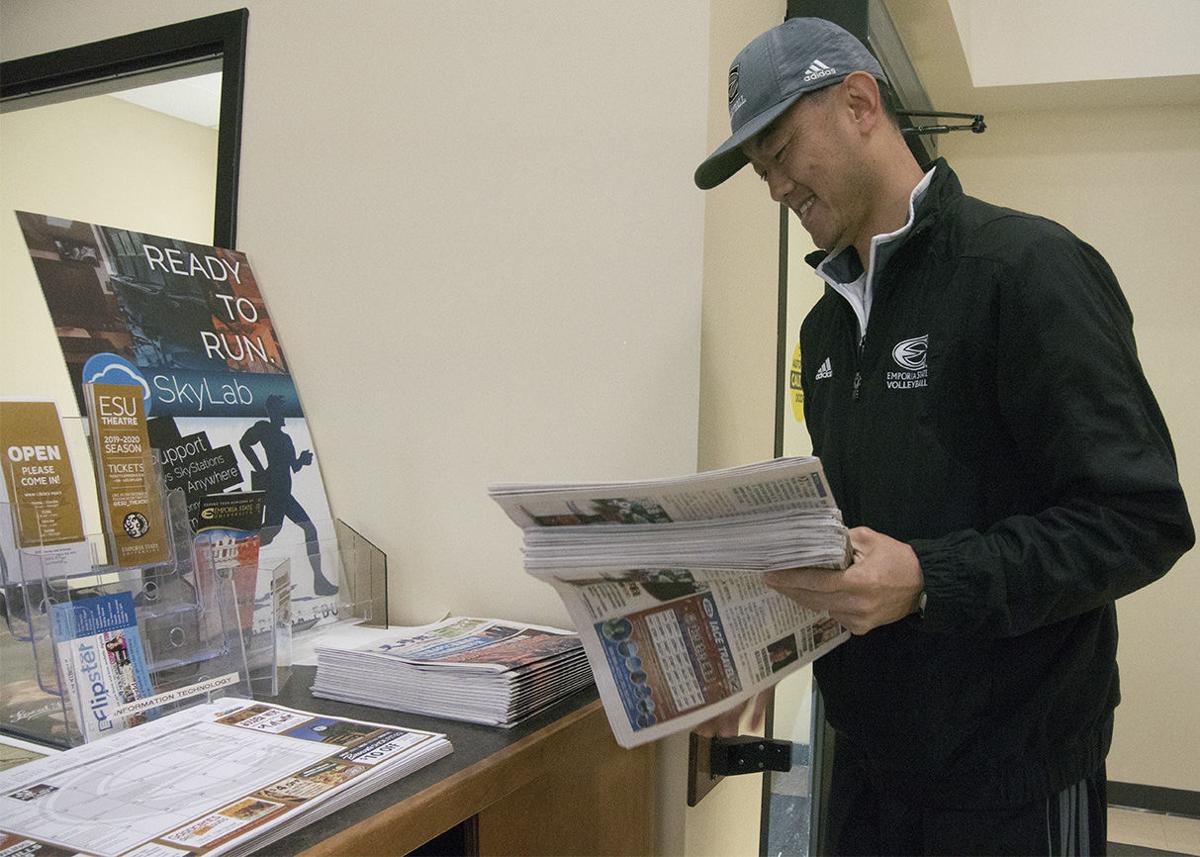 Xu delivers The Epoch Times to the William Allen White Library Nov. 5. Every week for nearly three years, the paper is delivered to his house and from there, he brings them to campus.

Bing Xu, head volleyball coach, speaks about The Epoch Times and what it means to him on Nov. 3. Xu has been distributing the Chinese language newspaper for three years and currently drops off copies to William Allen White Library.

Xu delivers The Epoch Times to the William Allen White Library Nov. 5. Every week for nearly three years, the paper is delivered to his house and from there, he brings them to campus.

Xu said he has been a practitioner of Falun Gong for twenty years and believes the paper, which styles itself as an alternative source of news meant to fight Chinese communist suppression and censorship, is spreading the truth.

“That’s why I want to deliver the newspaper to campus,” Xu said. “For the Chinese students and Chinese professors so they can know the truth. Not just about Falun Gong, but about what’s going on in the whole world. Like the trade war people are talking about right now between China and America, people need to know the truth.”

Every week Xu drops off 15-20 copies of the newspaper at the book return in the lobby of William Allen White Library. He also used to distribute copies to the Office of International Education, but said he was recently asked not to after a Bulletin reporter asked about the paper.

The Epoch Times was recently banned from advertising on Facebook for failing to meet their disclosure requirements. It has also been criticized as a source of misinformation in political topics.

Xu has been coaching at Emporia State for 17 years and is originally from China. Three years ago, he was approached by members of the Falun Gong to distribute the paper on campus.

“We have a really good Chinese population, a lot of Chinese students,” said Xu. “They come here from China and study at Emporia State…China is a great country. China’s people are great people, but a lot of times they don’t know the truth. The government tries to block a lot of information. Now that they are in the United States, they hopefully are given a way to really see what’s going on and what’s happening.”

A representative from The Epoch Times Midwest office said all distribution is done on a solely volunteer basis. Distributors, like Xu, are not paid.

“Every week they send the newspaper to my home and I pick it up and put in the library here and there,” Xu said. “I talked to our international office…I also talked to the head of the library and they said no problem.”

Xu said he was unfamiliar with the Aug. 22 report by NBC news that showed that The Epoch Times had been engaged in a multi-million dollar ad campaign for then presidential candidate Trump through fake names like “Pure American Journalism” or “Honest Paper” to get around the disclosure requirements of Facebook after being banned.

The Falun Gong, a spiritual movement descended from the Qigong religion, have accused China’s government of targeting its members for organ harvesting and human trafficking.

“For me Epoch Times aren’t involved in any politics stuff,” Xu said. “A ton of newspapers in the U.S. and the whole world give their own opinion about the president and everything. It’s just an opinion in the piece. Some people agree on this and some people agree on that. They have their own thoughts on this, but it’s not like they’re trying to guide you to support this party or that party.”

The Chinese government opposes The Epoch Times, according to Xu. Xu said that Falun Gong practitioners have been persecuted in the past for distributing the paper. Xu was informed several times that his name could be withheld, but did not think it would matter.

“That’s fine. You know, there is tons of people that have been persecuted in the last twenty years,” Xu said. “Thousands of people have died already standing up for what they believe.”

Xu said he feels safer practicing in the United States than in China, especially after his father’s workplace was raided by the Chinese Police Bureau.

“(The police) went to (my dad’s) organization and tried to investigate what kind of person (he was) like, ‘Hey, what’s going on here,’” Xu said. “They know I practice, but I’m the only one in my family to practice. They think it’s good for my health and moral standard, but just want me to do it secretly.”

“We really need to work on digging deeper with these (news) sources,” said Michael Smith, professor of social sciences. “What’s their professional journalistic background, what’s this all about? We can’t protect you and it is not our job to protect you from fake news or bad news, but we can help give you the tools to evaluate critically.”

Mark Daly, director of the Office of International Education, said he was unfamiliar with the paper other than the fact it was being distributed in his office by Xu.

“I’m not a fan of misinformation by any means so if that’s the case we should really look into it,” said Daly. “I don’t really know what its readership is.”

Daly said he wanted to look into the paper more.

“If it truly is a paper that is misleading and causing grievance then that’s a problem,” Daly said. “I don’t want to be promoting something that is erroneous or misleading.”

The Office of International Education has stopped distributing the paper at this time, but Daly did not respond to a follow-up request.

Gwen Larson, assistant director of marketing and media relations, said the content of the newspaper is irrelevant.

“It is a newspaper that is afforded the same rights under the U.S. Constitution that The Bulletin is or any other newspaper in this country,” Larson said. “It would seem questioning whether or not a newspaper should be on campus would open up a larger discussion. Should we be discussing every newspaper on campus and whether it belongs here.”

Larson said it is not the job of the university to filter material and that it would be ultimately up to department heads or teachers as to what is taught.

“Is evolution part of a science class or not,” Larson said. “Is evolution a theory, is it a scientific fact… Just because I know something is false someone else may not that. As you know we have some people in this country believing that historical events did not happen, but they have every right to express their views that they didn’t happen.”

Larson said it is up to the students to review the material of what they read.

“Part of addressing misinformation is educating people how to think critically,” Larson said. “We aren’t here to indoctrinate students… and I think that whether or not The Epoch Times should be on campus is part of a larger question. What if people don’t agree with what The Bulletin prints, should it be taken off campus?”

In a follow-up interview about what content might cause concern on campus, Larson said that unless the material itself is illegal to possess just about anything can be handed out on campus.

When asked by a Bulletin reporter for example if hateful material like the 1905 antisemitic publication “The Protocols of the Elders of Zion,” could be distributed on campus, Larson said: “I can make some assumptions based on the name, but that’s not something I’m familiar with. Hurtful speech is still protected speech, there is plenty of speech I don’t agree with, but I choose not to hear it.”

“The Protocols of the Elders of Zion” is “the most notorious and widely distributed antisemitic publication of modern times... The individuals and groups who have used the protocols are all linked to a common purpose: To spread hatred of Jews,” according to the U.S. Holocaust Memorial Museum website.

Larson said it would be all right to distribute the publication on campus.

“Honestly for that particular publication I would have to know more about it,” Larson said.  “I don’t know what the attorneys would say. What I know about freedom of speech is the classic tenant from the supreme court case that you can’t yell ‘fire’ in a crowded theater and cause a stampede where people get injured.”

Frank LoMonte, attorney and previous director of the Student Press Law Center, said that laws regarding speech can differ between universities and the general public.

“Legally speaking, the First Amendment definitely protects the right of both students and employees on a college campus to distribute literature,” LoMonte said. “An employee can’t push political or religious literature in a compulsory setting like a classroom. You can’t use the classroom as a vehicle to espouse your political beliefs or religious beliefs. Employees are under certain constraints when performing their official duties. But, if someone is handing out newspapers, or flyers or leaflets on a campus of a public college the First Amendment protects their ability to do that.”

As long as the material itself isn’t inciting violence, or is illegal to possess it is alright to distribute, even something like “The Protocols of the Elders of Zion” LoMonte said.

“If you’re not on a college campus, if you’re just on the street corner of a city there is no hate speech exemption to the First Amendment,” LoMonte said. “There are sometimes relaxed First Amendment standards on college campuses because of the concern for creating a hostile environment where people feel harassed. And honestly, the courts are struggling to find where the line for that should be. If it’s not something that advocates violence, it’s probably legally protected speech.”

President Allison Garrett said that she had not yet had a chance to talk with Daly.

Garrett said she was unfamiliar with the paper and Falun Gong.

“I don’t know anything about what is in that particular paper but we all have a right to decide what we’re going to read and what we’re not going to read,” she said. “I think this is a great example of discussions students ought to be having about the nature of the press and how as members of a free society we view the press and allow them to influence our political thoughts and votes and how we debate with one another about different political views.”

Editor's Note: Because of a reportering error, an earlier version of this story incorrectly reported the number of years Bing Xu has been coaching. It is corrected here.

Do the math: Buying a home now may be more affordable and save some cash

6 Tips for Refinancing Your Mortgage