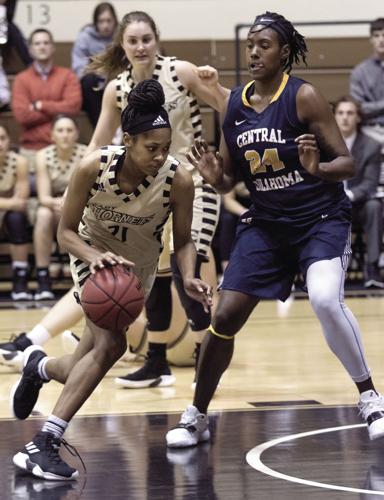 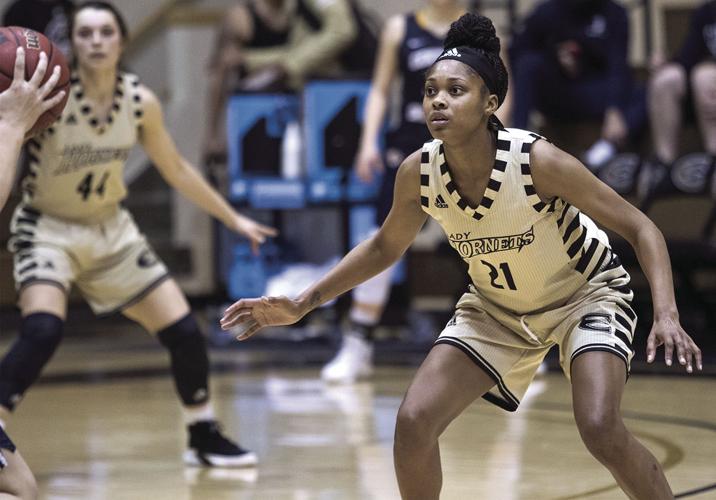 Wayne guards against an offensive player for Central Oklahoma. She is ranked second in the nation and first in in the MIAA for total steals.

Wayne guards against an offensive player for Central Oklahoma. She is ranked second in the nation and first in in the MIAA for total steals.

“A couple goals for me is to stay consistent and play hard every game,” Wayne said. “Now as goals for this team, (my) first (goal is to) win the MIAA tournament, followed by winning the national tournament.”

The MIAA Women’s Basketball Championship will be March 6-10 this year and will be held at the Municipal Auditorium in Kansas City, Missouri, according to the MIAA website.

Wayne is ranked second in the nation for steals and first in the Mid-America Intercollegiate Athletic Association, according to ESU Hornet Statistics. Wayne also leads in offensive rebounds, with 62 in total.

“She played two outstanding games when she was awarded MIAA Player of the Week,” said Toby Wynn, Women’s Basketball Head Coach. “It was a very deserving honor for her.”

The ESU women’s basketball team is currently in an eight game winning streak.

Last weekend the Hornets defeated Northeastern State with a final score of 66-60.

Why is customer experience essential to the MZ Generation? And why is that important?

Back-to-School Checklists Should Include COVID Vaccinations

Back-to-School Checklists Should Include COVID Vaccinations