In a decade of work in multilingual education, Jacqueline Rodriguez has seen students learning English as a second language treated as if knowing their first language is a disadvantage.

Rodriguez was appointed this summer as director of ESOL and migrant programs for Kansas City, Kansas, Public Schools. Her district serves 44% English learner students who speak more than 60 different languages but only provides French and Spanish programs.

Both programs, she said, are not yet up to par, and English learner students are asked to speak only English in the classroom.

“(Multilingual students) finish high school with such an advantage. Here we have children already with that advantage that we’re telling them that they don’t have,” Rodriguez said. “Especially right now in this time of COVID, we don’t have people that can support Swahili or Quran or all of these other languages that we have in the district, and our children are falling behind.”

With more than 160 different home languages across Kansas, world language educators and advocates say resources to support non-native English-speaking students in the classroom are not yet where they need to be because of difficulty finding staff and misunderstanding about the value of language.

According to the Kansas State Department of Education, approximately 50,000, or 10%, of the state’s student population are English learners. Of the 286 school districts, only five have dual-language programs, and 14 indicated they are teaching some form of a heritage language course.

While each district or classroom may vary, students in a bilingual or dual-language program are from the same language background, and the teacher often speaks both languages as a means of instruction in all subjects. Heritage language courses similarly provide students who have learned elements, but not all, of a second language from their parents at home the opportunity to further develop the language.

In an ESOL classroom, however, non-native English-speaking students come from various language backgrounds and are taught by a teacher who usually only speaks English.

ESOL programs also often provide learning support to students on the content of their other classes.

Rodriguez has a long history working to advance bilingual education in Kansas. Before her current position, she spent time as a Spanish teacher in the Blue Valley school district and was an instrumental part of bringing a Chinese immersion program to the district.

She said it is her goal to bring a similar Spanish program to Kansas City, Kansas, were 5% of the district’s students are Latino.

“I’d love to eliminate the ESL program and really service our heritage students in a way that benefits them and their learning,” Rodriguez said.

“The languages a person speaks are part of one’s identity. It’s important to know your family’s stories and to be able to pass those stories on to future generations,” Peszat said. “It is important for students to learn English. If a student loses the ability to speak their first language, then they lose the connection to their family’s stories and history and that’s tragic for the community.”

Peszat said in her role as world languages consultant she has gained a deep appreciation for the value of bilingualism and recognitions like the seal of biliteracy — an award given in recognition of students who have attained proficiency in two or more languages by high school graduation. 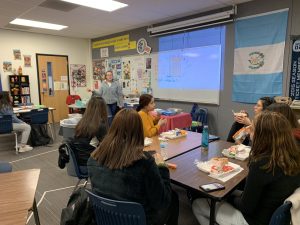 Marta Silva, who teaches at Olathe North High School, said it is important for school districts to build their world languages program with community needs in mind. (Submitted to Kansas Reflector)

Like Rodriguez, Peszat has noticed what she describes as “elite bilingualism,” where white children are praised for learning a second language but minorities are discouraged from doing so.

“We need to be conscious about the fact that learning more than one language is good for everybody,” Peszat said. “In the past, parents and teachers tended to think that a student had to stop speaking their first language so that they could focus on learning to speak English to be successful and to fit in to American society, but one doesn’t have to abandon their first language to do this.”

She said districts like hers and Blue Valley are not starting with community needs in mind. Instead, they are choosing languages that are beneficial for future careers — like Chinese and Spanish.

“This is not just about linguistic proficiency, and it’s not about separating Spanish and English,” Silva said. “Many heritage students have internalized both languages. They need both groups to communicate. They cannot choose one or the other.”

For most non-native English speakers in Kansas, however, the option to learn in their native language in a formalized school setting does not exist. Beyond the lack of understanding surrounding the value of bilingualism, many programs struggle with staffing.

KSDE requirements dictate an immersion teacher must have elementary education certification, on top of certification or a degree in their language. These standards have created a shortage of qualified educators.

Rachel Benson, coordinator of the Chinese immersion program at Blue Valley Schools, said most teachers they hire return to school for a second degree while teaching classes.

“They are doing their very first year of teaching, but then they’re in school full time also, and it is very taxing on them,” Benson said. “One of my immersion teachers right now already has two degrees, and now she is working on the third so she can stay teaching in our program. It is just a lot for them.” 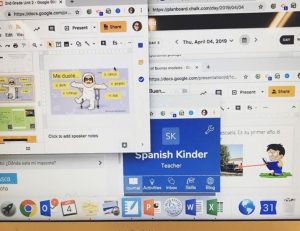 Jacqueline Rodriguez’s lesson planning during her time as a Spanish teacher at Blue Valley School Districts. (Submitted to Kansas Reflector)

Many programs rely on an international faculty program to maintain staffing. The Visiting International Teacher Program allows certified educators from China, Spain and Germany to teach in Kansas schools for a period of one to three years.

“As long as they are authentic, magazines, newspapers, videos, even if they are local and not from another country, are incredibly useful,” said Delia Pérez-Solórzano, a world language instructional coach at KCKPS.

According to a recent report on world language program funding and expenditure by the Kansas Legislative Division of Post Audit, 22 of 25 districts reviewed reported spending more to provide bilingual services and resources than they received in state funding in the 2018-19 school year.

State funding only covered 68% of the expenditures by these programs and almost all of the 25 school districts supplemented the state funding with additional federal or local funding.

Fernanda Peterson, a Spanish teacher at Liberal High School, stressed the importance of increased attention toward world language programs. Her district is 60% Latino, but education there has yet to reflect the reality, she said.

Offering bilingual education, Peterson said, would only increase outcomes among students in the state she said.

“The importance of learning a second language not only opens up job opportunities, but it also develops your brain differently, better memory, more creativity, better communication, better problem-solving,” Peterson said. “People do not realize that it is a gift when they can speak, read and write a second language. And it is even better when they can do it correctly.”

Addressing and improving health disparities begins with you

Got a case of winter doldrums? Yoga and meditation can help.